During June and July of 2013 I funded a book project using Kickstarter for total pledges
of $18,889 USD from 818 project backers. Because my initial requested amount was $2,500
this project was funded at a level of 755%. To see my Kickstarter project, click here.
What does this all mean? If you are familiar with Kickstarter these stats are likely
very familiar.

If you are not familiar with Kickstarter, let me explain how this works. Kickstarter is
all about crowdfunding. Crowdfunding is where you obtain money from many individuals to
achieve some sort of goal. People who support a crowdfunding project are called backers.
Backers may or may not get something in return for their support. These days just about
EVERYTHING is being crowdfunded. You can even use crowdfunding to help with the costs of
adopting a child.

In my case, I want to write a book as an indie publisher. This is nothing new to me.
I’ve published a number of books both with big publishing houses, as well as on my own.
I am very much sold on the indie publishing route. Other than the obvious creative
freedom indie publishing is simply more lucrative. At least for my particular niche.
Your results may vary!

What Does it Cost to Indie Publish a Book?

I am creating a new book about Artificial Intelligence Programming. It will be the first
in a series of books. I’ve written on this topic before. As an indie author I do have
some costs. These costs break down as follows.

You may have additional costs beyond these. However, for me, these are the big three.
My book is essentially a technical/scientific/mathematical book. Because of this I
simply lay it out in LaTeX for typesetting, and bullet three above ends up costing me
very little. If you are not that familiar with typesetting then “step three” may
cost more.

I’ve found that previous book projects cost me around $2,500 USD to get off the ground.
Because of this I set my Kickstarter goal to be $2,500. However, the question becomes,
“Will I ever sell enough copies to make this money back?” This is where Kickstarter
comes in. People will pledge money to get the finished project. Essentially I am
pre-selling the book. For myself, as an author, this is an advance. Though, $18k is a
considerably larger advance than I ever got working with large publishing houses.

I set my goal to be $2,500 over 30 days. A project length of 30 days is VERY common in
Kickstarter. Most advice suggests to go with 30 days. This seems about right for me,
and I am not going to suggest to the contrary. Under this model, I had 30 days to gain
enough pledges to meet $2,500. If I did not hit $2,500, then I get nothing. Kickstarter
is all or nothing.

Kickstarter is all or nothing. Either I hit (or exceed) the funding goal, or you get
nothing! My project would forever revert to the status of “Unsuccessful”. That worried
me a bit! I did not want a failed Kickstarter page as a lasting monument to this book.

There are two schools of thought on funding goal. I simply set my funding goal to exactly
what I needed to create the book. If I hit $1000 and not $2500, then I don’t have enough
money to produce my product and the project should be canceled.

The other school of thought is to set this value higher. There is a fear that if you hit
your goal, in my case, $2,500, your project will lose all motivation and you won’t get
much funding. I think there is some truth in that. I’ve seen projects burst towards an
unmet goal in the final days of the project.

Ultimately, this is your own decision. When I do the second volume in this series, I will
very likely set it to $2,500 again. I felt like this was high enough that it seemed
“non-trivial”, yet was actually a genuine estimate of my costs. I do not think my
project lost any motivation once it hit $2,500. Actually quite the opposite. For a
variety of reasons, which I will cover later in this post, my project really took off
after it met its funding goal.

Overview of My Kickstarter Book Project

My Kickstarter project started on June 10, 2013, you can see it at this link. You can see
its complete progress here.

Here are some important dates.

I feel like the project got its initial lift, to $2,500 from my existing Facebook and
Twitter followers. However, the major bang came from Hacker News, Reddit and finally
Kickstarter itself. So where did all of these backers come from? Here is a fragment from
my backer source report.

This is just the top portion of the chart, there were quite a few other sources too, just in lower dollar amounts. As you can see, Direct Traffic accounted $3,460 worth of backers, this was mostly Hacker News. Kickstarter Popular really delivered. They broke this into the home page, as well as Popular (Discover). The Embedded Widget also delivered $1,349. This is a widget that I embedded in several of my sites. You can see it here. 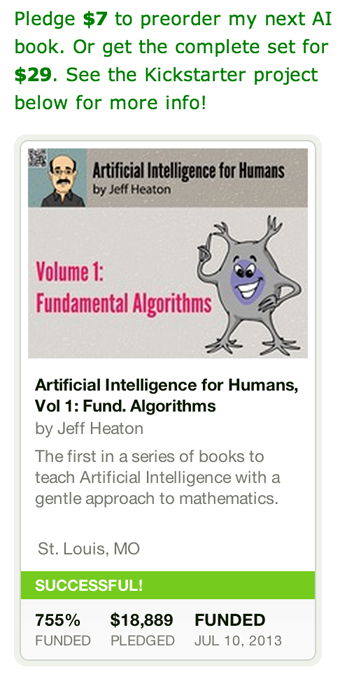 Just my followers alone would have gotten me past the goal, and then some. However, the real power came from social media, particularly Kickstarter itself.

Was Kickstarter Worth It?

I was not sure if I should use Kickstarter for this project. I figured I already had my
established base of followers. I could even do some sort of pre-sale event on my own
website. Kickstarter also takes 5%. In the end, I decided that maybe running it on
Kickstarter would get me more followers in return for that 5%. I did get more followers,
but I also got my total revenue more than doubled. The following chart shows it the best. 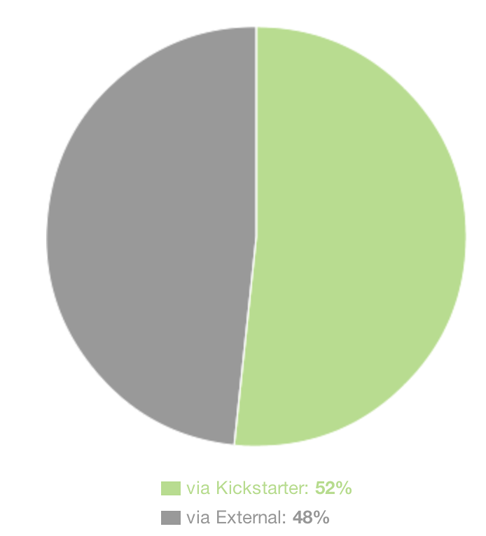 Just over half of my revenue came from Kickstarter! So YES, Kickstarter was worth their very small 5%.

The project video is very important. It is very important to show what your book is, and why is it important. My video probably could have been better. I feel like my story (the text that goes with your project) was better than the video. I tried to focus on really two aspects.

Every project will take a different video. I suggest you find books like yours and watch their videos! Make it relavant!

Rewards are what cause backers to pledge. I tried a variety of rewords.

My “high ticket” pledges did nothing. I was not sure about these, but I did see other
projects have some success with these. I would not spend much time thinking about
high-ticket pledges. For the next volume I will probably have one $1k high-ticket pledge
and the rest will top out at $250.

I also did an Early Bird pledge level. I’ve seen other sites do this. The idea is that
it helps secure some initial buzz for your project. In reality, I am not sure the
difference between $9 and $7 meant much. Next time I will probably just do the $9
reward level. $9 is for an ebook, which is what I will ultimately price this book at
on Amazon.

The “ebook extravaganza” was every popular. I basically threw in my previous AI books at
a discount. This will be a very important component for future Kickstarter projects.
The idea here is to give the backers something to read while they wait for the book to be
done. If you have other material you can package up in a digital format, this might be an
option for you!

The $100 backers allowed people to express additional support, and also be mentioned in
the books acknowledgments. This was a popular level and contributed to the bottom line.

Look at other projects and pick rewards that make sense! This is what I did.

Getting the Word Out

Publicity is critical. While I did get quite a few backers from Kickstarter, I would have
not done this without external sources. Kickstarter is an amplifier. An amplifier takes
a signal and makes it stronger. However, it has to be a good signal to begin with!
Kickstarter will not “kick in” until your project reaches some degree of popularity. To
do this, you need to rely on sources such as:

Your own blog: I have two primary sites. My blog and Heaton Research. Together these
sites see about 100k hits a month.
Other blogs: Try to reach out to similar blogs. Ideally BEFORE you start a Kickstarter
campaign. Don’t view similar blogs as competitors. Comment on their stories and get to
know them. They might help you promote an occasional project. My blog has a decent amount
of traffic, and I am often very willing to do this. If the content is in line with my
topic.

Facebook and Twitter: If you have a blog, you should have a page for followers. This
is mine. Twitter is important too. I earned several thousand dollars on this Kickstarter
from these two.
Pay Attention

You backers (and potential backers) will post comments and ask questions. A quick reply
will often win a pledge. Also look for FAQ’s. You can easily add FAQ’s to your project.
I ended up being out of town for the last 4 days of my Kickstarter! It actually ended on
a travel day! Here I am in Denver International Airport responding to queries on
Kickstarter. I was on my way back from San Francisco to St. Louis. Yeah for Denver for
having free wifi! 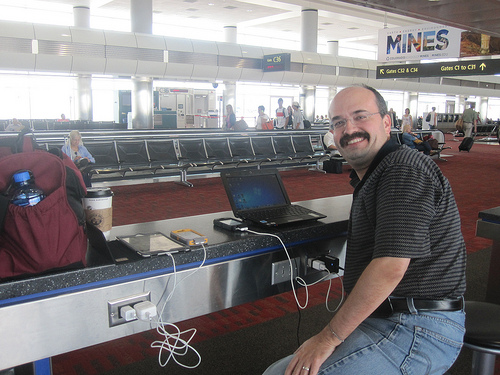 Questions from users will often give you great ideas for additional pledge levels to add.

After the Project Ends

Other than the obvious task of writing your book, here are a few suggestions that I have.

You can only survey each gift type once: I did not know this going in. Ultimately you will send your backers a survey when your project has been funded and you are ready to send them their reward. This survey allows you to collect necessary information to get them their reward. Here is the part I did not know. You can only send the survey once! Why is this a problem? I have rewards that are staggered. If they got my ebook extravaganza I had planned (and offered in the text of the gift) to send that in July. But my book won’t be done until December. So for a “paperback + ebook extravaganza” backer I need their email address NOW and their shipping address in December. If I use a survey I must ask for BOTH now. What if they move over those 6 months? To solve this I am simply messaging all backers that I need info from NOW.
Make a final edit to your story: Once your project funding period ends in either success or failure, your project’s story will “lock”. You will not be able to change it. I left a link on my project page with instructions for users who might have “missed the Kickstarter”, you can see mine here. This provides a link to a page on my own website that will evolve as the project does. For now, it links to a EJunkie Buy Button that allows users to still order the ebook extravaganza or preorder. Eventually it will likely take them to Amazon to buy the finished book. (once I finish the book).
Provide translation: It is easy to provide a translation. Just use Google translate. You can find a great example of a project doing it here. I did not do this. I am selling an English book. If you can’t read my promo page, you probably do not need my book.
Plans for Next Time

I will do a Kickstarter project again. This is a multi-volume set. The main points for improvement are: