Another important difference between a NEAT network and an ordinary feedforward neural network is that other than the input and output layers, NEAT networks do not have clearly defined hidden layers. However, the hidden neurons do not organize themselves into clearly delineated layers. One similarity between NEAT and feedforward networks is that they both use a sigmoid activation function. Figure 1 shows an evolved NEAT network: 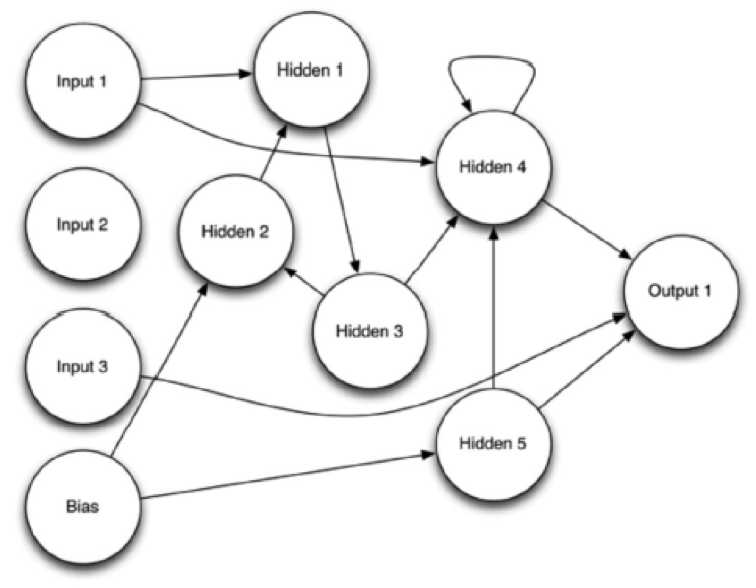 Input 2 in the above image never formed any connections because the evolutionary process determined that input 2 was unnecessary. A recurrent connection also exists between hidden 3 and hidden 2. Hidden 4 has a recurrent connection to itself. Overall, you will note that a NEAT network lacks a clear delineation of layers.

The above diagram shows the outputs from each neuron, over each connection, for three cycles. The dashed lines indicate the additional connections. For simplicity, the diagram doesn’t have the weights. The purpose of Figure 2 is to show that the recurrent output stays one cycle behind.

NEAT mutation consists of several mutation operations that can be performed on the parent genome. We discuss these operations here:

You can increase the probability of the mutation so that the weight perturbation occurs more frequently, thereby allowing fit genomes to vary their weights and further adapt through their children. The structural mutations happen with much less frequency. You can adjust the exact frequency of each operation with most NEAT implementations.

NEAT crossover is more complex than many genetic algorithms because the NEAT genome is an encoding of the neurons and connections that comprise an individual genome. Most genetic algorithms assume that the number of genes is consistent across all genomes in the population. In fact, child genomes in NEAT that result from both mutation and crossover may have a different number of genes than their parents. Managing this number discrepancy requires some ingenuity when you implement the NEAT crossover operation.

NEAT keeps a database of all the changes made to a genome through mutation. These changes are called innovations, and they exist in order to implement mutations. Each time an innovation is added, it is given an ID. These IDs will also be used to order the innovations. We will see that it is important to select the innovation with the lower ID when choosing between two innovations.

You also need to note that NEAT will not recreate innovation records if you have already attempted this type of innovation. Furthermore, innovations do not contain any weight information; innovations only contain structural information.

Crossover for two genomes occurs by considering the innovations, and this trait allows NEAT to ensure that all prerequisite innovations are also present. A naïve crossover, such as those that many genetic algorithms use, would potentially combine links with nonexistent neurons.