The compositional pattern-producing network (CPPN) was invented by Stanley (2007) and is a variation of the artificial neural network. CPPN recognizes one biologically plausible fact. In nature, genotypes and phenotypes are not identical. In other words, the genotype is the DNA blueprint for an organism. The phenotype is what actually results from that plan.

In nature, the genome is the instructions for producing a phenotype that is much more complex than the genotype. In the original NEAT, as seen in the last section, the genome describes link for link and neuron for neuron how to produce the phenotype. However, CPPN is different because it creates a population of special NEAT genomes. These genomes are special in two ways. First, CPPN doesn’t have the limitations of regular NEAT, which always uses a sigmoid activation function. CPPN can use any of the following activation functions:

You can see these activation functions in Figure 1: 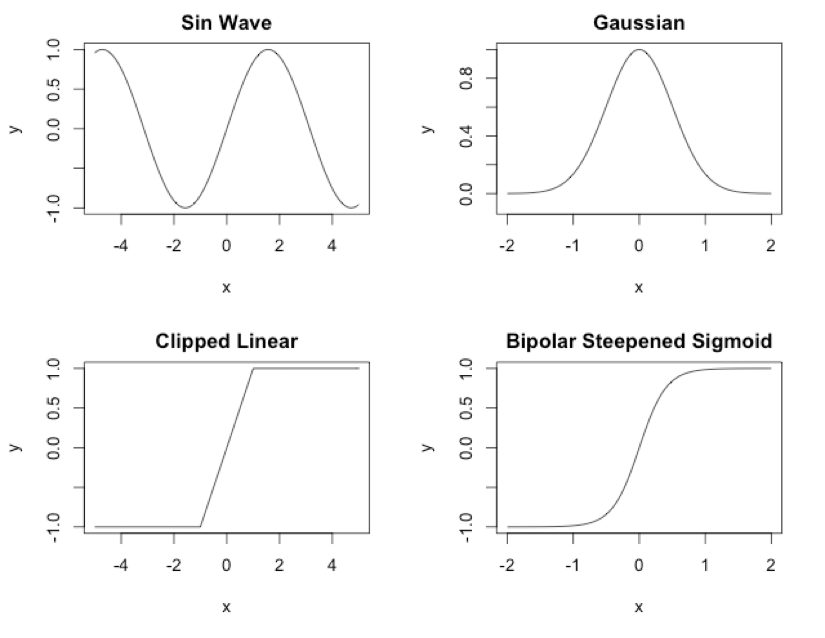 CPPNs are typically used in conjunction with images, as the CPPN phenotype is usually an image. Though images are the usual product of a CPPN, the only real requirement is that the CPPN compose something, thereby earning its name of compositional pattern-producing network. There are cases where a CPPN does not produce an image. The most popular non-image producing CPPN is HyperNEAT, which is discussed in the next section.

Once you have evolved a CPPN to create an image, the size of the image (the phenotype) does not matter. It can be 320x200, 640x480 or some other resolution altogether. The image phenotype, generated by the CPPN will grow to the size needed. As we will see in the next section, CPPNs give HyperNEAT the same sort of scalability.

We will now look at how a CPPN, which is itself a NEAT network, produces an image, or the final phenotype. The NEAT CPPN should have three input values: the coordinate on the horizontal axis (x), the coordinate on the vertical axis (y), and the distance of the current coordinate from the center (d). Inputting d provides a bias towards symmetry. In biological genomes, symmetry is important. The output from the CPPN corresponds to the pixel color at the x-coordinate and y-coordinate. The CPPN specification only determines how to process a grayscale image with a single output that indicates intensity. For a full-color image, you could use output neurons for red, green, and blue. Figure 2 shows a CPPN for images:

You can query the above CPPN for every x-coordinate and y-coordinate needed. Listing 1 shows the pseudocode that you can use to generate the phenotype:

The above code simply loops over every pixel and queries the CPPN for the color at that location. The x-coordinate and y-coordinate are normalized to being between -1 and +1. You can see this process in action at the Picbreeder website at following URL:

Depending on the complexity of the CPPN, this process can produce images similar to Figure 2:
Figure 3: A CPPN-Produced Image (picbreeder.org) 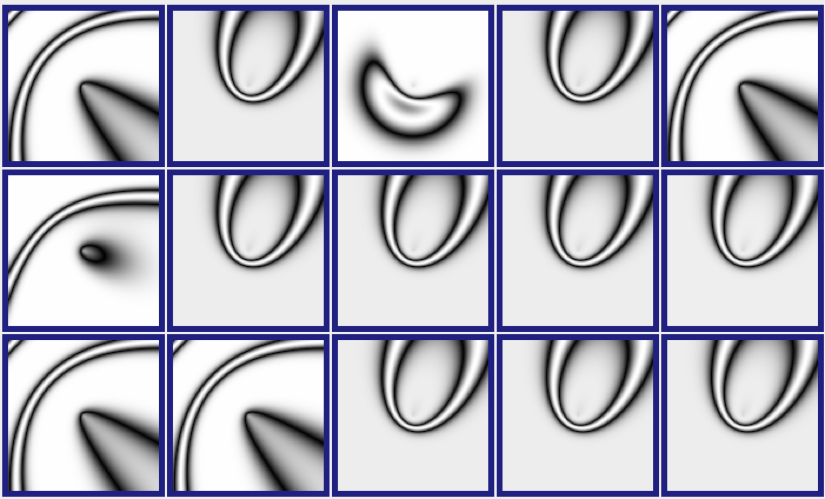 Picbreeder allows you to select one or more parents to contribute to the next generation. We selected the image that resembles a mouth, as well as the image to the right. Figure 3 shows the subsequent generation that Picbreeder produced. 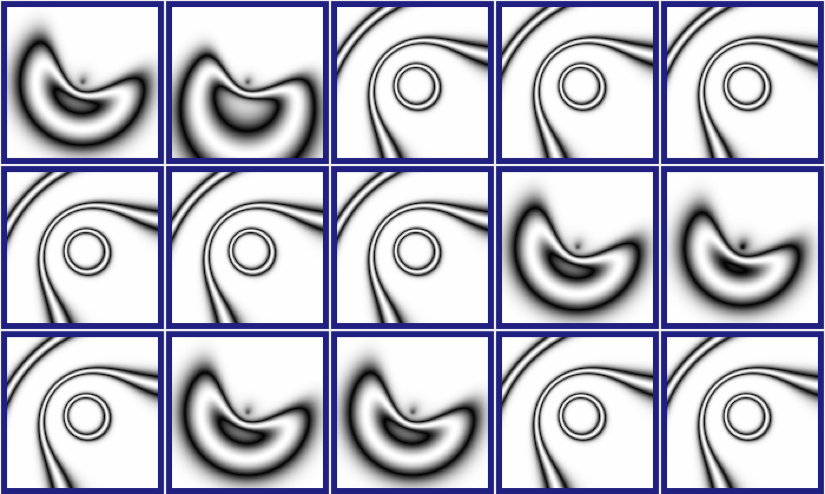 CPPN networks handle symmetry just like human bodies. With two hands, two kidneys, two feet, and other body part pairs, the human genome seems to have a hierarchy of repeated features. Instructions for creating an eye or various tissues do not exist. Fundamentally, the human genome does not have to describe every detail of an adult human being. Rather, the human genome only has to describe how to build an adult human being by generalizing many of the steps. This greatly simplifies the amount of information that is needed in a genome.
Another great feature of the image CPPN is that you can create the above images at any resolution and without retraining. Because the x–coordinate and y–coordinate are normalized to between -1 and +1, you can use any resolution. 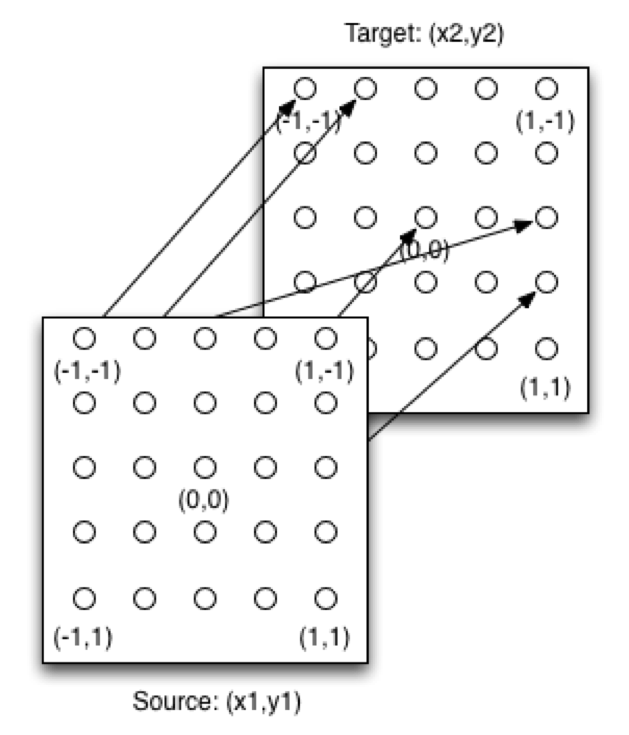 Together with the above substrate, a HyperNEAT CPPN is capable of creating the phenotype neural network. The source plane contains the input neurons, and the target plane contains the output neurons. The x-coordinate and the y-coordinate for each are in the -1 to +1 range. There can potentially be a weight between each of the source neurons and every target neuron. Figure 8.8 shows how to query the CPPN to determine these weights:

Computer vision is a great application of HyperNEAT, as demonstrated by the rectangles experiment provided in the original HyperNEAT paper by Stanley, Kenneth O., et al. (2009). This experiment placed two rectangles in a computer’s vision field. Of these two rectangles, one is always larger than the other. The neural network is trained to place a red rectangle near the center of the larger rectangle. Figure 8.9 shows this experiment running under the Encog framework: 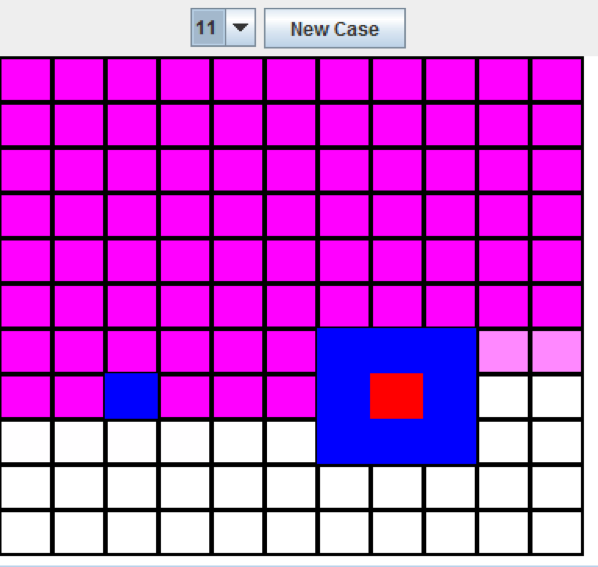 As you can see from the above image, the red rectangle is placed directly inside of the larger of the two rectangles. The “New Case” button can be pressed to move the rectangles, and the program correctly finds the larger rectangle. While this works quite well at 11x11, the size can be increased to 33x33. With the larger size, no retraining is needed, as shown in Figure 6: 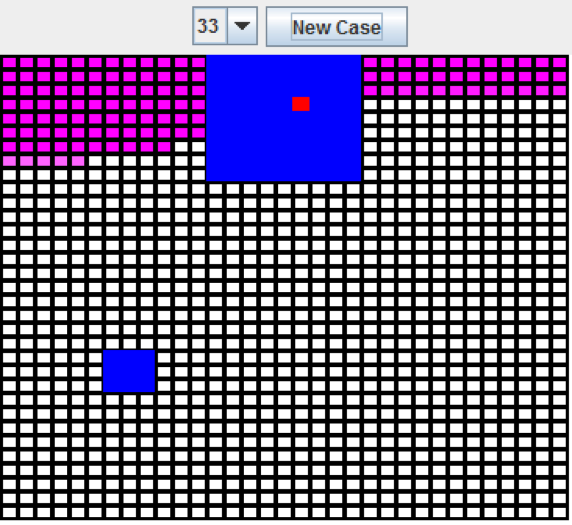 When the dimensions are increased to 33x33, the neural network is still able to place the red square inside of the larger rectangle.